Professor Leonie Scholtz from Pretoria has witnessed huge changes in her specialty since she started 25 years ago, and is happy that radiologists now play an integral role in the diagnosis of cardiac pathology and form part of the team involved in the management of patients.

European Society of Radiology: Could you please give a detailed overview of when and for which diseases you use cardiac imaging?

Leonie Scholtz: South Africa has a very high incidence of ischaemic heart disease. Rheumatic valvular disease is also still relatively common and therefore infective endocarditis not uncommon in the South African population. Tuberculosis is endemic and tuberculous pericarditis prevalent especially in the HIV infected population. South Africa has the highest HIV infected population in the world and there are approximately 7.2 million people living with HIV locally. Pericardial and myocardial manifestations are very common.

ESR: Which modalities are usually used for what?

LS: Except for chest x-ray assessment, which is pretty much routinely performed on every patient, all the cardiologists perform echocardiography studies and conventional angiography procedures. CTCA is now well established locally and performed in all the academic institutions as well as most of the private radiology practices. CMR is also performed in all the academic centres and in some of the private radiology practices in the larger metropolitan areas. All the academic institutions perform nuclear studies including SPECT and PET imaging and most of the larger cities have hospital-based practices that own nuclear equipment and PET/CT scanners. The main indications for CMR include viability assessment, myocarditis, sarcoidosis, arrhythmogenic right ventricular dysplasia (ARVD) and hypertrophic cardiomyopathy.

ESR: What is the role of the radiologist within the ‘heart team’? How would you describe the cooperation between radiologists, cardiologists, and other physicians?

ESR: Radiographers/radiological technologists are also part of the team. When and how do you interact with them?

LS: Radiographers are employed by the radiologists in the private sector and by the different health departments in the public service. They form an integral part of the diagnostic imaging team. Radiographers who underwent an extra four-year course in ultrasound are now also performing most of the ultrasound studies.

LS: Most of the radiologists in South Africa are generalists and expected to report general x-rays as well as CT and MRI studies (including neuroradiology, chest, MSK and abdominal work) throughout their working day, even if some of them have done fellowships in specific subspecialties. Only a few perform interventional procedures and CTCA or CMR though. Approximately 50% of my time is spent reporting general work, including CT and MRI scans and the rest I spend on cardiac CT and CMR. In the academic institutions, the consultants do concentrate on specific subspecialties however and it is not expected of them to report on everything.

ESR: Do you have direct contact with patients and if yes, what is the nature of that contact?

LS: I personally do all the IV contrast canalisations and talk to all the patients who undergo an MRI or CT scan that I personally have to report. I also personally talk to every patient who has to undergo a CTCA or CMR study before the patient is put on the bed.

ESR: If you had the means: what would you change in education, training and daily practice in cardiac imaging?

LS: Ideally cardiovascular radiologists would find themselves in a situation where they only have to report on cardiac studies. Radiologists locally do not always have the time or means to do fellowships abroad and South Africa does not offer cardiac imaging fellowships locally yet.

ESR: What are the most recent advances in cardiac imaging and what significance do they have for improving healthcare?

LS: Patients now have access to CTCA and CMR in all the larger cities, and the advances in software, especially when it comes to CMR sequences, adds a lot of value. South Africa has a very high incidence of CAD and CTCA is helping to exclude its presence in the low and intermediate risk groups. CMR has helped a lot in the assessment of viability in the work-up before revascularisation as well. CTCA has helped to reduce unnecessary conventional angiograms and CMR has helped to risk stratify patients with ischaemic as well as non-ischaemic cardiomyopathies.

ESR: In what ways has the specialty changed since you started? And where do you see the most important developments in the next ten years?

LS: The specialty has undergone huge changes since I started 25 years ago especially when it comes to CT and CMR. The radiologist now plays an integral role in the diagnosis of cardiac pathology and forms part of the team involved in the management of these patients. Our role was restricted to the reporting of cardiomegaly on a chest x-ray years ago but the cardiac radiologist can now diagnose CAD, assess viability and diagnose myocarditis or infiltrative disorders, to name only a few.

ESR: Is artificial intelligence already having an impact on cardiac imaging and how do you see that developing in the future?

LS: AI does not have an impact locally yet but I expect that to change. I do not believe that the cardiac radiologist or radiologists in general will become redundant, but I believe that it will make our day to day life easier in future and can definitely potentially help to reduce reporting times and maybe even increase accuracy levels. 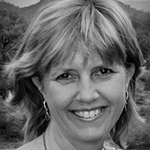 Professor Leonie Scholtz is currently Professor Extraordinaire at the Department of Diagnostic Radiology at the University of Pretoria, where she collaborates with the Departments of Radiology, Cardiology, Thoracic Surgery and Nuclear Medicine. Having matriculated in 1974 from the Afrikaanse Hoër Meisieskool in Pretoria, Professor Scholtz obtained her MBChB at the University of Pretoria in 1980. Thereafter she did post-graduate training in echocardiography and cardiac interventional procedures at the Department of Cardiac Radiology at the Stanford University School of Medicine in the USA (1983–84). This was followed by an MMedRad D (Diagnostic) back at the University of Pretoria. In 1993, Professor Scholtz started a private practice at the Pretoria Heart Hospital. This practice now operates from twenty-five sites, throughout the Gauteng, Limpopo, Mpumalanga and Northern Cape provinces, and is one of the largest radiology practices in South Africa, with ten partners. In 2002, Leonie was Professor and Head of Department of Diagnostic Radiology and Nuclear Imaging at the University of Pretoria. During this time she served on the EXCO and was for a number of years Vice-President of the Radiological Society and served on the Interventional Society, both of South Africa. She is currently the Chairperson of the Cardiac Imaging Society of South Africa (a subcommittee of RSSA). Professor Scholtz has spoken at many international conferences and has published numerous papers. She has provincial colours in swimming and squash, although she now cycles and enjoys skiing. Leonie is a keen photographer for which she won an international award and she has three (extremely talented) children.